Have You ever played with symmetry toys together with Nobel laureates?

Symmetries for Everybody – Symmetries in Action!
The Symmetry Festival’s Family Day in DELFT, The Netherlands
August 4, 2013 from 4 PM, Market Square (De Markt) in Delft 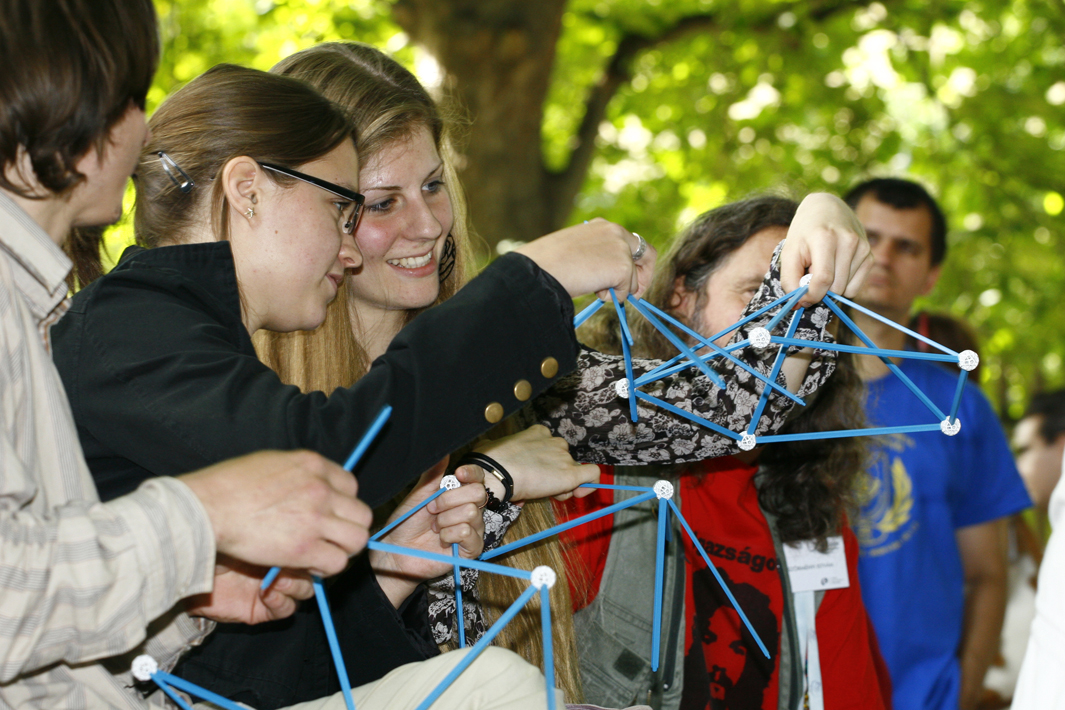 Our goal is to offer an unforgettable experience, an on-site immersion for the visitors into the funworld of symmetries.
The participants of the Symmetry Festival, including world-famous scholars, various artists, workshop holders, educators and animators prepare interesting community activities, games, workshops, interactive demonstrations, presentations and an interactive public exhibit to provide the opportunity for everyone to enjoy various activities related to the phenomena of symmetry.

“There are few things more satisfying than to see small children completely engrossed in hands-on creative exercise and discovering that the models self-assemble, almost by magic, into beautiful structures.” Sir Harry Kroto 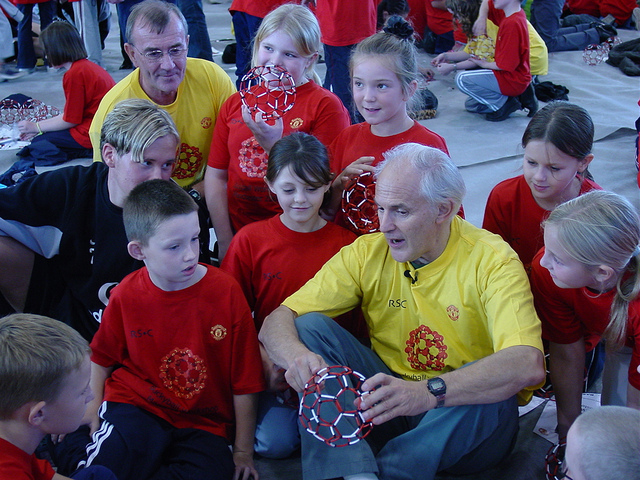 Professor Sir Harry Kroto, who is known world-wide as both a scientist and a charismatic motivator of young people, presents his famous ‘Buckyball’ Workshop to children. Sir Harry was awarded the Nobel Prize for his discovery of a new form of carbon, buckyballs. These carbon fullerene molecules are made of pentagons and hexagons and have the same shape as a traditional football. At the workshop the children construct their own model of the ‘buckyball’ using a specially provided kit.

Have You tried to build a large ZomeTool model of a DNA sequence? With PAUL HILDEBRANDT & LÁSZLÓ VÖRÖS 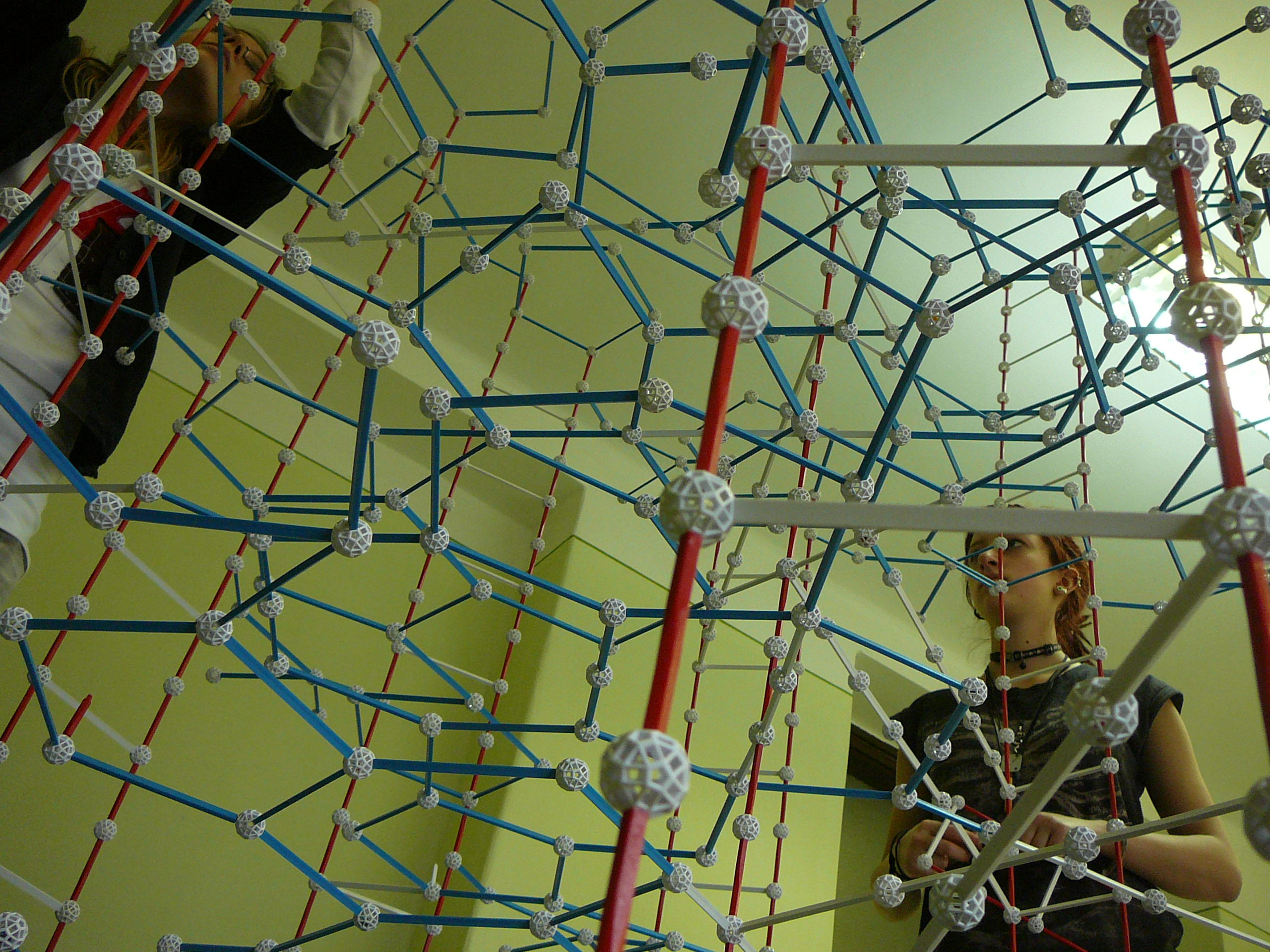 There is something very big going on here! Paul Hildebrandt (Zometool) and Professor László Vörös (Pécs University) prepares to build a 3m high DNA sequence from Zometool. To make this ambitious plan realized, they need all the help they can get. Come and participate! We will build not only a giant model, we will build a community!

Bead It! With BIH-YAW JIN 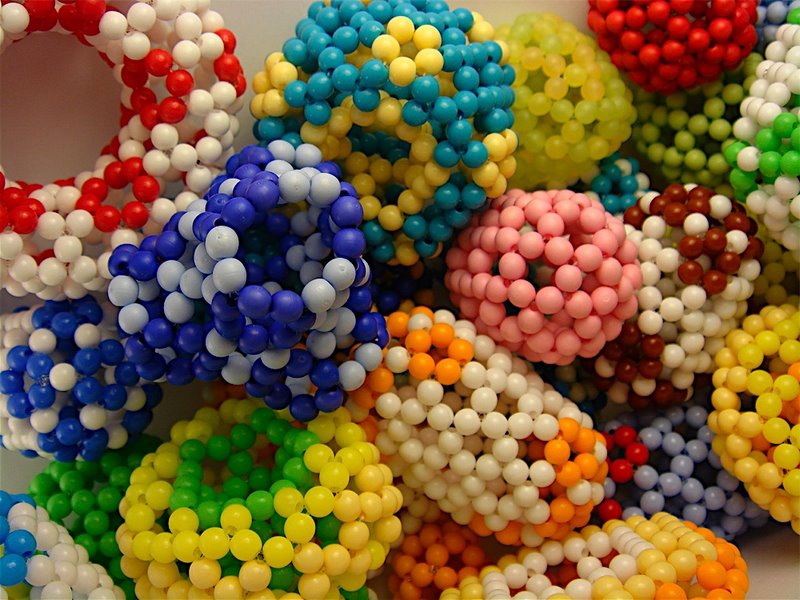 In this workshop on the beaded model of fullerenes, we will give participants
hands-­‐on experience about how to make bead models for several important fullerenes such as C60 or C70. In the first project, we will make a bead
model for the smallest fullerene, C20, a dodecahedron consisting of twelve pentagons. Participants will learn the basic techniques of weaving for other fullerene compounds in about a half hour. With this experience, we will move on to the truncated icosahedron, C60, in the second project. Additionally, we will also have an exhibition of a few beadworks for all participants.

Let’s Play The Game in 5 DimensionS! with RENATE QUEHENBERGER 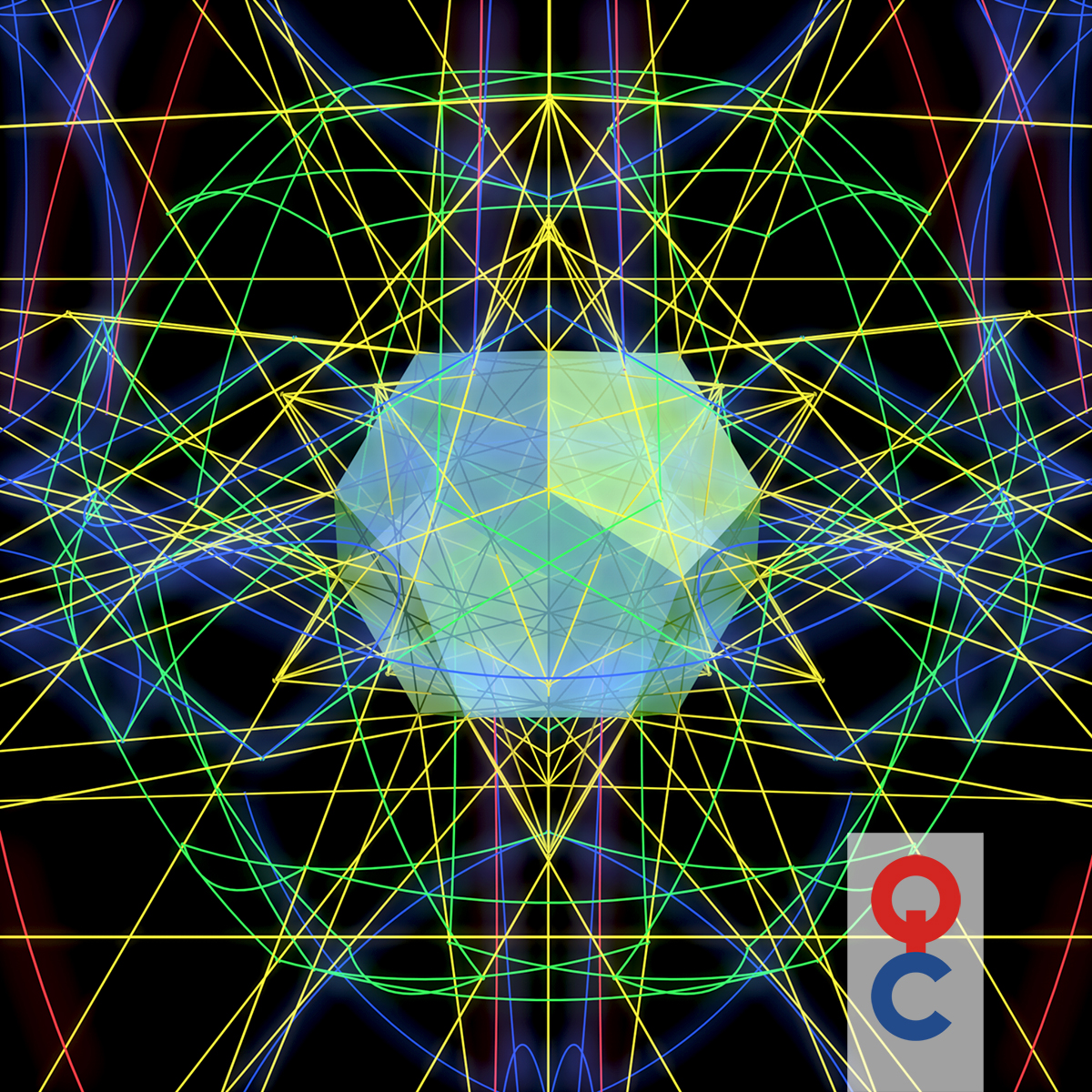 “Enfolding Epitahedra” means playing with 5D- space cells. The double epitahedron E± is a 3D representation of the Penrose Kites and Darts Tiling, which is the Pattern of the Golden Ratio in the plane and a 2D slice of the 5-dimensional space. We will enfold those newly found heptahedra in all possible shapes and try to put them together in different compositions, such as the “star” and “sun” configurations. By arranging 12 of these seven-faced solids to a dodecahedron they are revealing their higher dimensional properties,- as 4-dimensional dodecahedra with configurations in the center which are containing quantum-mechanically possible structures. What else will we discover together this afternoon?

The painter and her mathematical models: Welcome to the math-artist’s workshop – with SYLVIE DONMOYER & JEAN PEDERSEN! 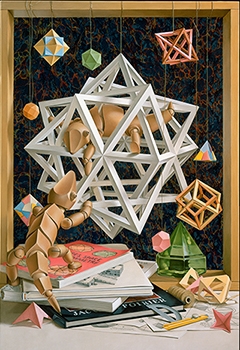 Sylvie Donmoyer will present the setting and the models used in the creation of three of her paintings: Homage to Escher, A Mathematical Tapestry, and the JMM 2012 award-winning Still Life with Magic Square. She will show the three paintings and discuss how the Platonic solids in their various braided forms, along with braided rotating rings, and models of a completely different type, known as collapsoids, were used as subjects for painting in the classical tradition of still-life as well as creating beautiful imagery using the latest 3-D software. The models will be available for the participants to play with, take apart, and reassemble. One of the co-authors of A Mathematical Tapestry, Jean Pedersen will be present. She has agreed to help reconstruct any of the models if we are unable to do so on our own. Complete instructions for constructing the models used can be found in A Mathematical Tapestry, which will also be available for viewing at this session.

Have you ever amazed by the wonderful symmetries of Persian art? Make your own design with help of the artist MOJGAN LISAR! 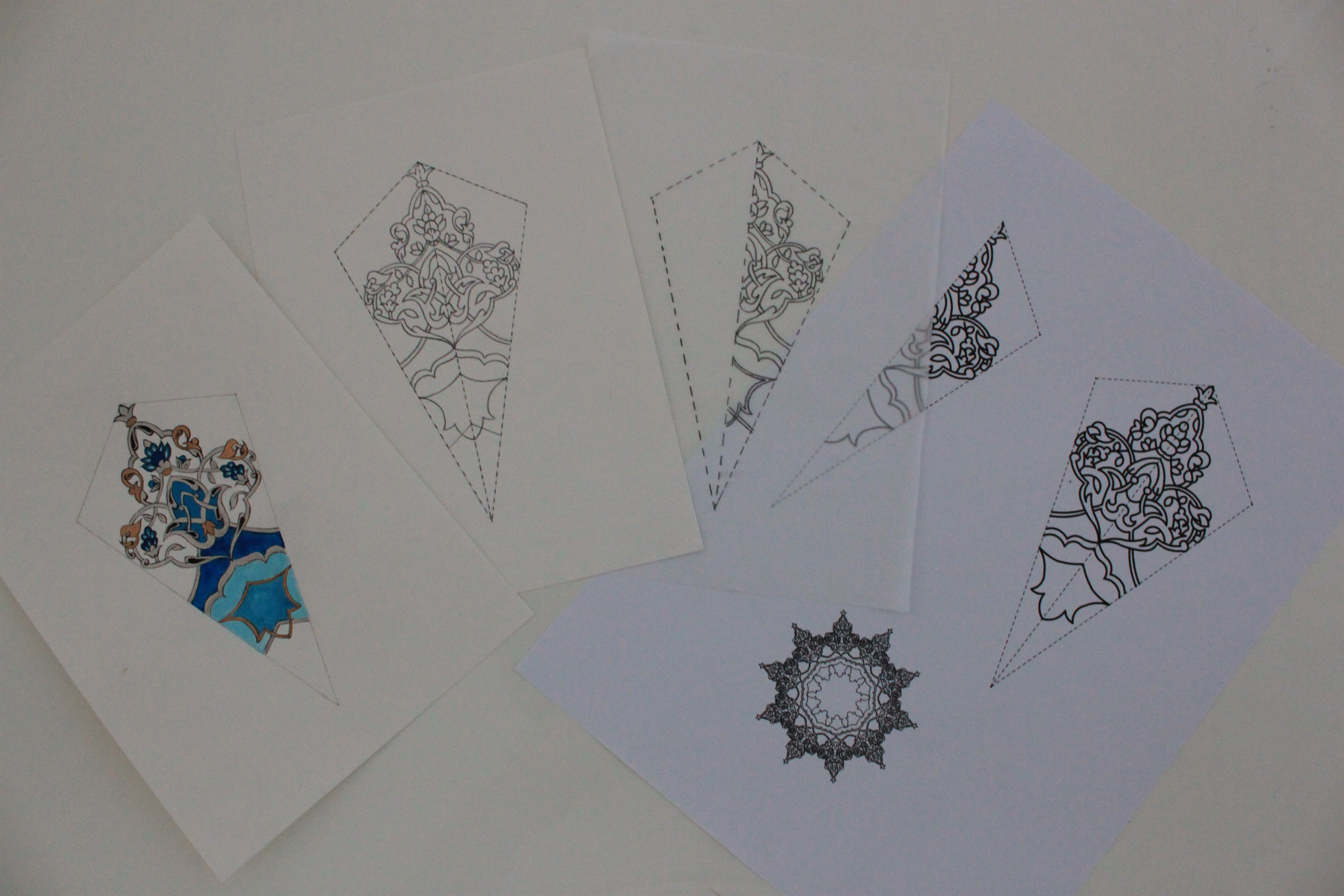 Tazhib (Illumination) is a classical Persian art for the decoration of treatise and books. It has an intertwining relationship with calligraphy. In the medieval Persia, a highly refined art of Tazhib developed that its tradition has continued even today. In a traditional Persian Tazhib one can find mathematical ideas and concepts such as symmetries, logarithm and Archimedean spirals, polygons and star polygons. We use the traditional methods used in this art to create a Tazhib symbol. 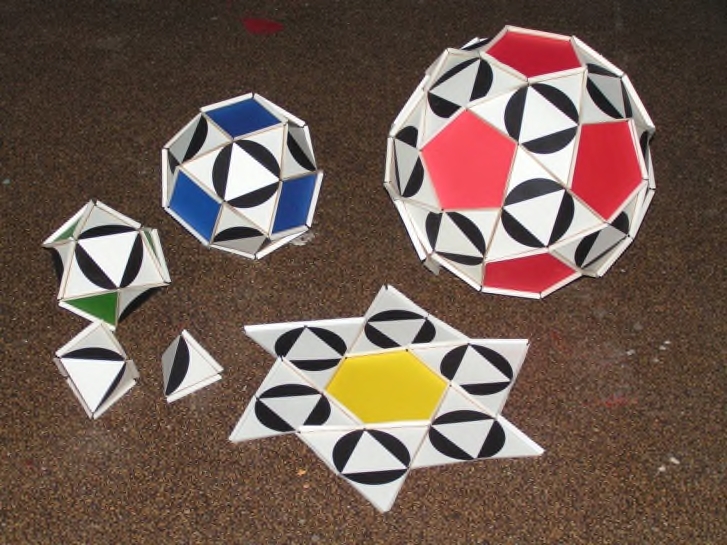 Polyhedra are defined as portions of space surrounded entirely by regular polygons. They form a tight family consisting of only 18 individual members. The top members are the five regular ones, the surface of which can be composed of only one kind of polygons: tetrahedron, octahedron and icosahedron of regular triangles, cube of squares and dodecahedron of pentagons. These regular solids are generally ascribed to Plato and they have a very close relationship to one another. All other members, the semi-regular solids, has 13 members, that each consist of more than one (two or three) different polygon kinds and they are said to have been discovered by Archimedes. There are actually 15 of these, as two of them exist in a right- and a left-handed version. They all are in fact derived from the regular ones by truncation in such a way, that the cutting planes always are regular polygons. 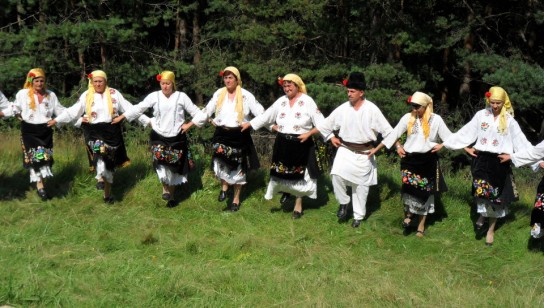 Folk dance is one of the most fascinating windows into cultural practices, as it expresses cultural archetypes and paradigms and traces historic migrations of peoples. Folk dance is also a fascinating window into culturally-situated mathematics. For example, in Western European and White North American folk dance we find a preference for symmetry, order, and balance. In non-Western traditional dance styles, such as those found in Bulgaria, Macedonia, and farther East, we find widespread appearance of asymmetric meters (sometimes with unequal beats within a measure). Contra dance, which is consists of repeated patterns that break and restore the symmetry of a ‘square’ (group of four), set precisely to a musical pattern that is 64 measures long, can be seen as an expression of the mathematics of symmetry, permutations, and even Group Theory, arising from the period known as the Enlightenment in Western Europe. In this workshop we will compare American Contra Dance with traditional dances from a few of the many micro-regions of Bulgaria and Macedonia, in theory and in practice.

Moving in to a Geodesic Dome – with BIAGIO DI CARLO 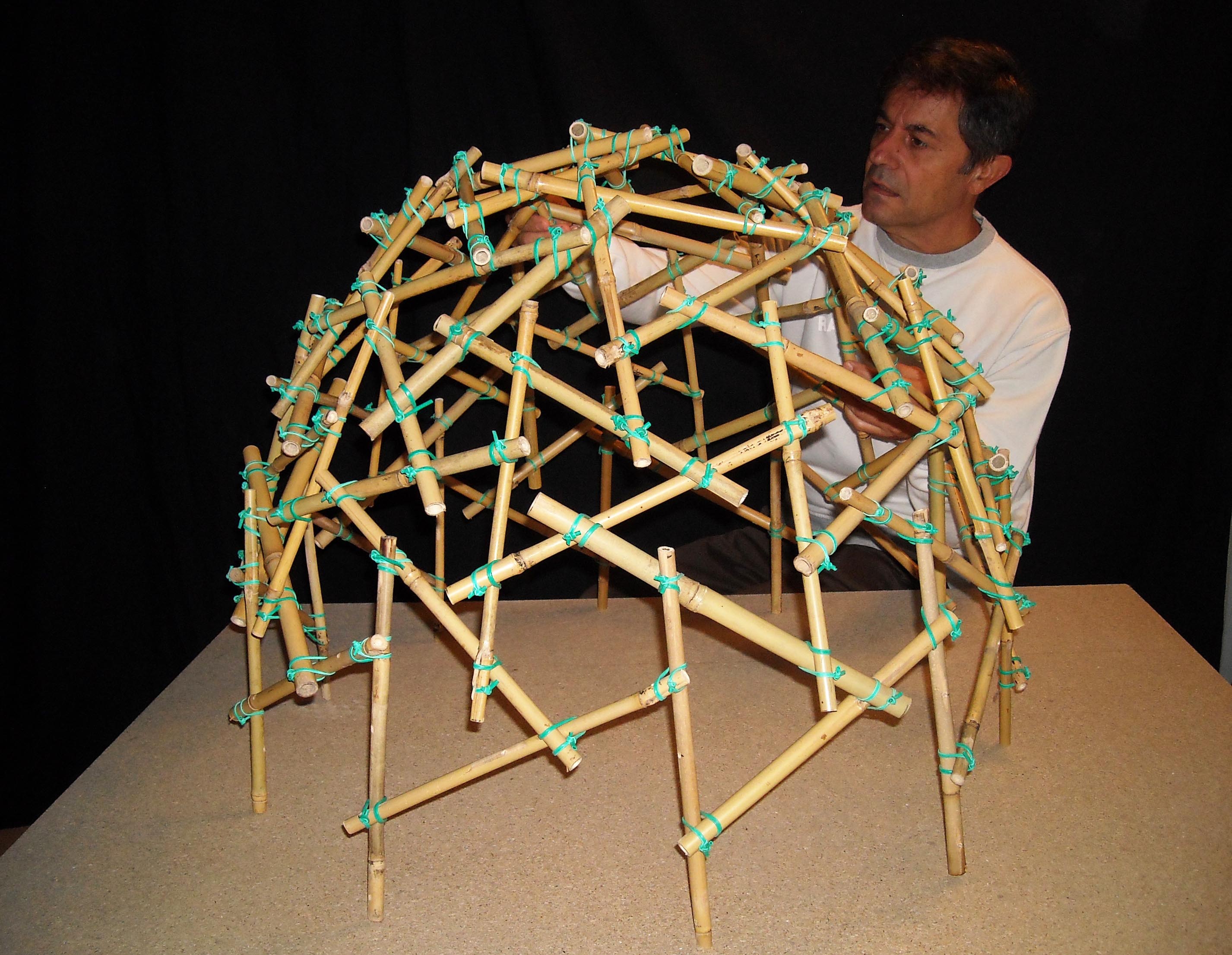 In this workshop we explore the potential of the triangulated forms by using the reciprocal frame jointing. The goal is to achieve that synthesis that Leonardo was talking about, a synthesis that brings to gain art in science and science in art in all our works. The science of design is the geometric bridge between art and science. Geometry becomes an intermediary between harmony and unity of the natural world. Geometry is not an human invention but a creation of nature, man has learned from nature itself.

The SAXON POLY-UNIVERSE math-art toy contains the basic geometric shapes of the painter János Szász SAXON’s poly-dimensional artworks. With these colorful geometric shapes everybody can generate complicated mathematical and morphological puzzles based on symmetry. The toy provides equal opportunities for children of all ages and at all levels of mental and emotional maturity. The POLY-UNIVERSE math-art toy serves as a catalyst for new educational practices of learning by playing. 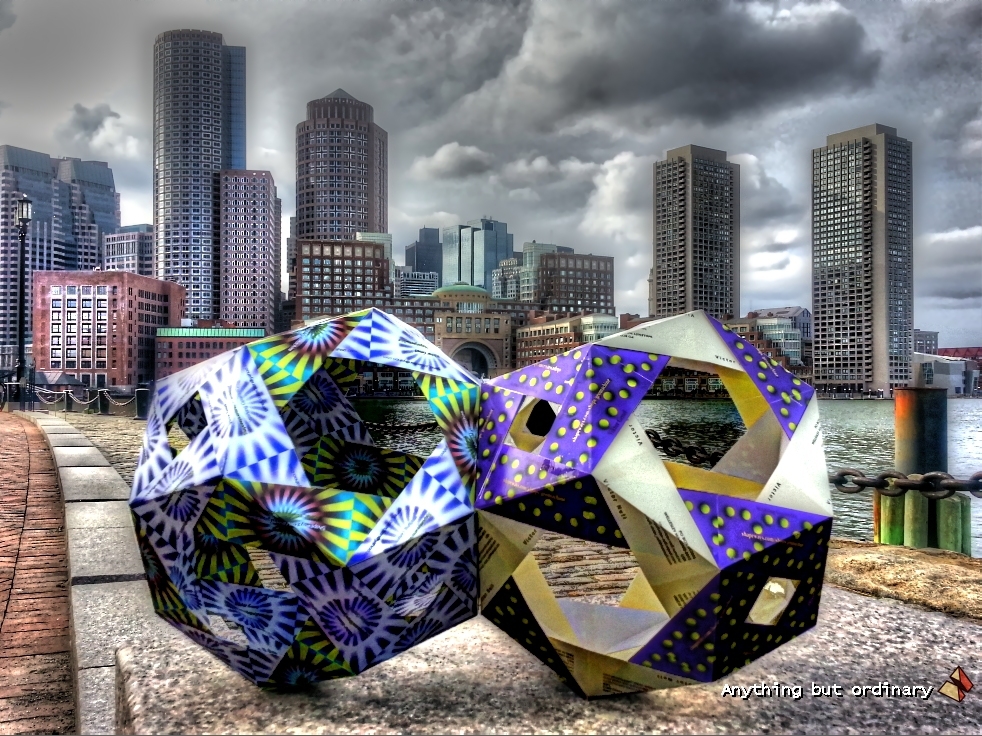 American standard business cards have a length/width ratio 3.5/2. It has a perfect proportion to allow all sorts of symmetry related manipulations. I’ve been asked if this relates to the golden ratio. The answer is – no. Close, but not quite…
The Golden Ratio: phi = (1+sqrt(5)/2 = 1.6180339887… For the proposed operations, the ratio must be Sqrt(3) = 1.732050807568877… It is the ratio between a side and a median of an equilateral triangle. American and Canadian business card ratio are 1.75 – the best! Being folded three times the cards can be used to model many of well-known polyhedrons, such as Plato’s solids, Archimedean solids and Johnson solids… Folding the cards once (along their diagonals) allows for the creation of “Jumbified” versions of the same solids. One of the most striking consequences of this is an ability of business cards to create a structurally sound model of such a remarkable polyhedron as a truncated octahedron or Mecon (Richard Buckminster Fuller has coined the term).

Get lost and find your way in the Amazing Labyrinths of SAMUEL VERBIESE! 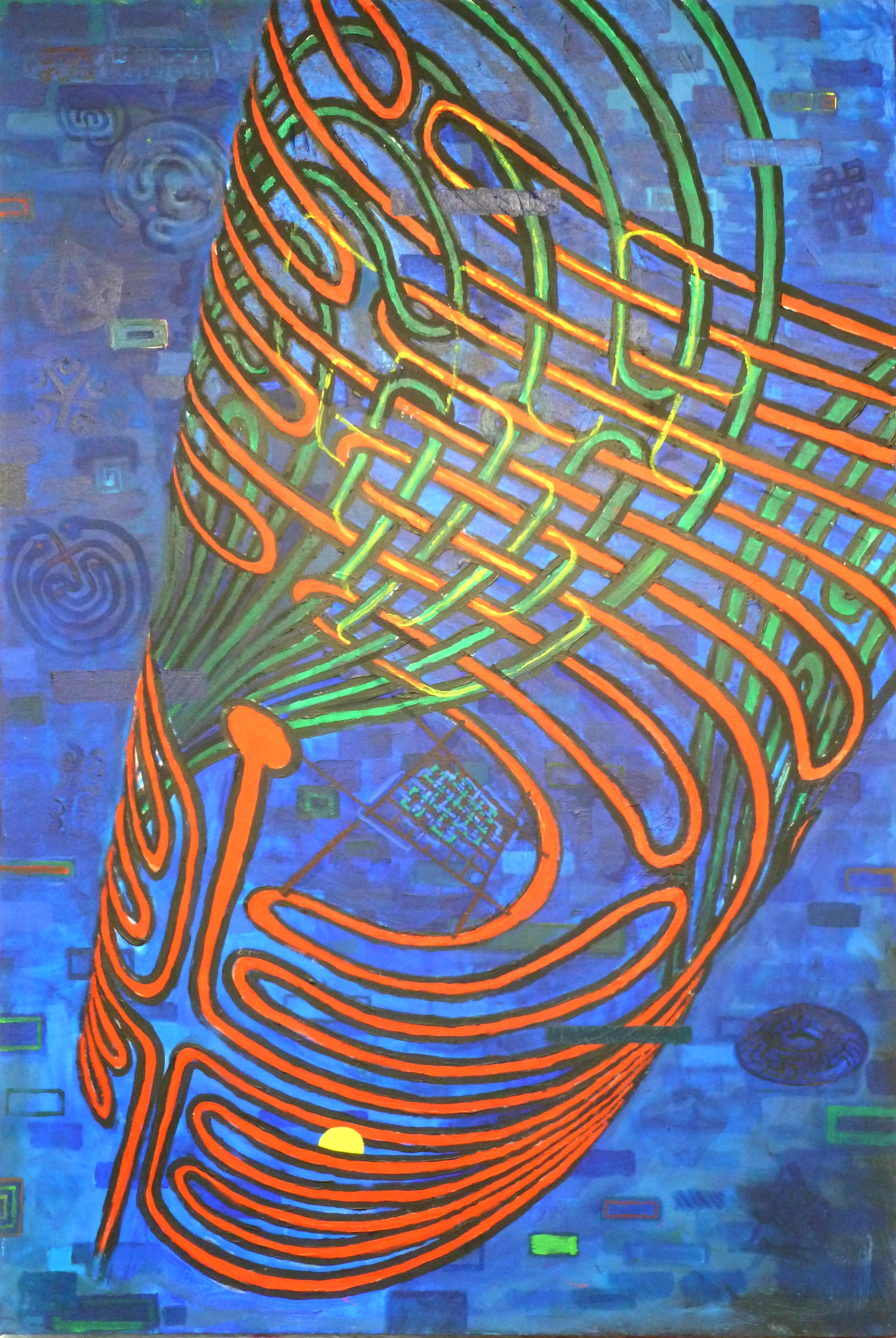 Using his 10 years experience in labyrinths and storytelling skills, Sam, a visual artist with an engineering background which naturally took him to polyhedra, knots, etc., would like to embark children and their parents into a playful immersion into the geometrical magic of labyrinths that evolved during thousands of years from the spiral and meanders to the Cretan iconic labyrinth to the Chartres masterpiece and beyond, including 3D. Participants will get a thorough basis to grasp the differences and complementarities between labyrinths and mazes and learn to rapidly create large interesting labyrinths on sea shores, gardens, and here at the workshop with colorful chalks on the floor.

The symmetry magic of Morphohedron by STEPHEN WILMOTH 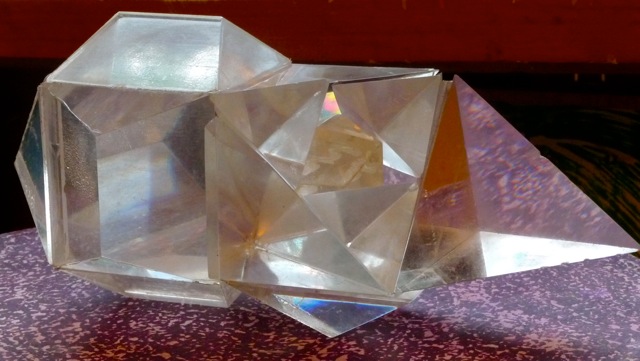 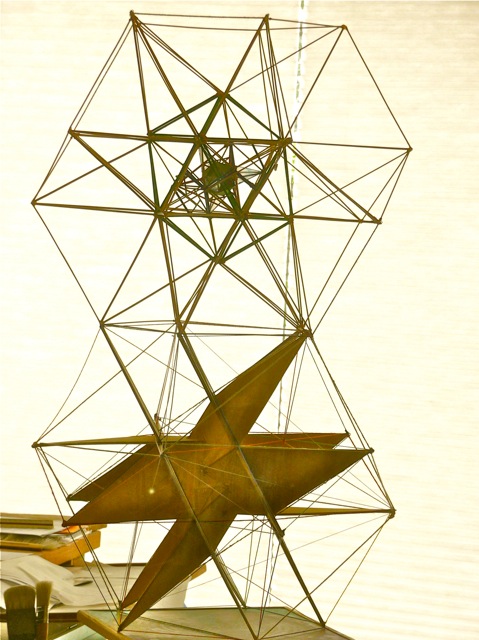 In this workshop we will demonstrate how all Regular Polyhedra can be assembled using only the Extreme and Mean Ratio, or the ”Golden Ratio”. We will build a stick figure of Morphohedron to show use of all axial symmetries (3, 5, and 8) in the combination of all Regular Polyhedra, combined into only one structure. This will demonstrate the best example of the Fibonacci Sequence in 3 dimensions.

Come and Join Us @ the Symmetry Festival’s Family Day At the Market Square of Delft on August 4, 2013, 4PM!