Homage to the masters of Russian Constructivism
International art festival and exhibition series
Moscow, May 10 to June 5, 2006 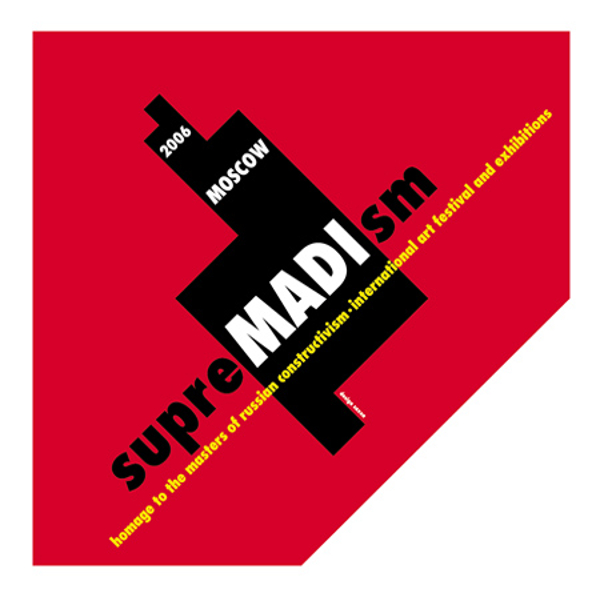 Between May 10 and June 5, 2006, the International Mobile MADI Museum Foundation, based in Hungary, organizes “supreMADIsm”: Homage to the masters of Russian Constructivism, an international art festival and related exhibitions in Moscow.

The history of geometric art spanned the entire 20th century, beginning with early suprematism and continuing through MADI, the contemporary geometric art movement that manifested itself 60 years ago and is actively present even today. The supreMADIsm Festival leads the fully matured and almost classicized
geometrical tendencies (Suprematism, Neo-Plasticism, Russian Constructivism, Art Concret, Kinetism, and MADI) back to their common cradle, Moscow.

In addition to paying homage to the masters of Constructivism, the festival will chiefly aim further to enhance cultural exchange contacts, with special regard to the invitation extended to Russian creative artists to contribute to the public collection of the Hungarian Mobile MADI Museum. They will also be expected to join the international MADI movement, which commemorates the 60th anniversary of its inauguration in 2006.

“… memory alone is in the position to make the meaning and depth of a happening manifest to us, for we need a certain point of view and certain distancing in order to decipher the message intended for us.”

Through homage and commemoration, PAST finds its way into the heart of the PRESENT today – while the cells of the FUTURE stem
from the present. The “supreMADIsm” art festival intends to encourage this intellectual process, record it, and make it part of art history in Moscow.

Venues of the events:

The main patrons are and open the Festival, respectively:

Artistic patron of the Festival:

László Beke,
director of the Research Institute for Art History of the Hungarian Academy of Sciences

Scientific patron of the Festival:

PROGRAM OF THE FESTIVAL

János Fajó: Russian Constructivism in the past and the present in Middle Europe
János Saxon-Szász – Boldizsár Fejérvári: The poly-dimensional Black Square
Irina
Anishchenko: Suprematist elements in Russian church architecture
Ravin Galiulin: Crystallography as an element of culture
The shared roots of the geometry of crystals and relativity theory
Sergey Petoukhov: Geometrical properties of the genetic code and the symbolic system of the Ancient Chinese book “I-Ching”.
György Darvas: The generalization of geometric symmetries in the science and art of the 20th century

Club Bilingua
Multimedia project: “Two Kandinskys”
A special
version by Vadim Tallerov based on the etude of Alexander Stroganov

Author of the original idea, director and stage manager: Vadim Tallerov
Costumes designed by Anna Koleychuk
Light-effects by Sergei Shevchenko
Video-art by Dmitry Koleychuk
Assistant director: Yevgeny Pynin
There are red poems by Vasily Kandinsky and there are projected his pictures Moscow, Composition No. 6 and Concert

Programmes of the ensemble “Open stage” are sponsored by the Metropolitan Cultural Committee of Moscow.

Nemchinovka in the vicinity of Moscow

Time: 10.00am to 3.00pm
Commemoration and homage at the sign burial place of Kazimir Malevich in Nemchinovka